What Happens in an Art Therapy Session?

Here are examples where art therapy has made a difference in people’s lives.
Remembering play
Bill and schizophrenia - using art therapy to explore isolation and loneliness, friendship and belonging

'Playing' was a key ingredient to Bill finding his way through the issues he was exploring. Enjoyment is essential to well-being as well as having someone actively listening to your story, For example, Bill (not his real name) lived alone, a tall, good-looking gentleman in his middle thirties. People said he was a nice guy, keen to please everyone, keen for people to like him. However, he had schizophrenia which at times made him appear odd, and this made it hard for him to make friends. As a result he had become lonely and depressed. When he came to an art therapy session, I discovered that in the past Bill had loved sculpting so I placed an array of coloured plasticine amongst the other art materials on the table. As we began exploring the issues he was facing he began making shapes with the plasticine and by the end of our time together he had formed a simple sculpture of plasticine spheres. Through the session he discovered how freeing it can be to simply relax and have fun and that relationships did not have to be such hard work. 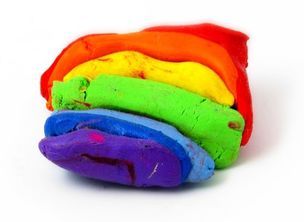 Plasticine
Finding a place to belong
​Jane - from being homeless to having a home, using art therapy to explore what it is to have a personal safe place

When I first met Jane, not her real name, she was homeless and had left school at an early age. During our time together Jane was asked to imagine what a safe place would look like. She created a drawing to represent this ‘safe place’. I asked her what made this a special place and what would she do there - Jane continued to use drawing to explore what this meant to her. With the help of the art therapy Jane was able to connect the meaning of the pictures with what she needed in life and how to find a way there. When that moment came both client and therapist were elated! I saw Jane three months later. She was now living in a unit in which she could invite her friends. She had room where she could paint. Her paintings had improved so much her father was now buying them. Her father’s actions affirmed her worth and his love for her, something she had never felt before. 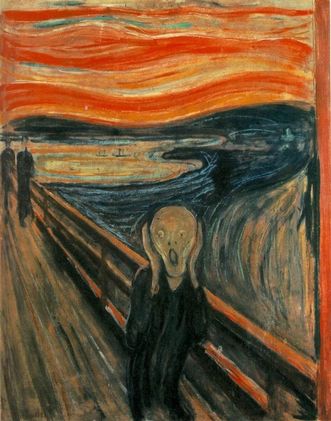 The Scream| Edvard Munch |1893 (public domain, United States)
In his diary in an entry headed "Nice 22 January 1892", Munch wrote: "I was walking along the road with two friends – the sun was setting – suddenly the sky turned blood red – I paused, feeling exhausted, and leaned on the fence – there was blood and tongues of fire above the blue-black fjord and the city – my friends walked on, and I stood there trembling with anxiety – and I sensed an infinite scream passing through nature." (Peter Aspden, 21 April 2012, "So, what does 'The Scream' mean?", Financial Times)

Instinctively, Munch engaged an art therapy process when he started to paint what he felt. Today, this process helps to manage and cope with difficult emotions by objectifying them, thereby, releasing  pent up tension.